Marine seismic surveys use sound energy to map geological structures under the seabed. Seismic surveys are an essential part of offshore exploration as they provide information on the depth, position and shape of underground geological formations that may contain oil and gas. 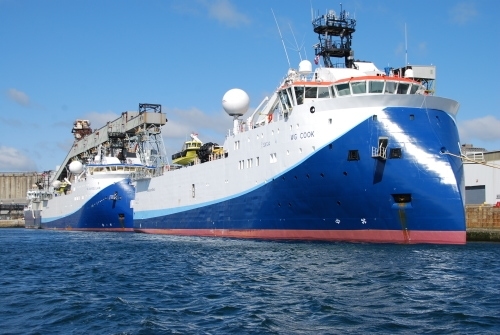 Before a company can perform a marine seismic survey it must first undertake a thorough Environmental Assessment (EA), which reviews potential environmental impacts in the proposed survey area along with feedback from the public and marine stakeholders. The EA is reviewed by the Department of Fisheries and Oceans (DFO) and the Department of Environment and Climate Change, and must be approved by the Canada-Newfoundland and Labrador Offshore Petroleum Board (C-NLOPB) or the Canada-Nova Scotia Offshore Petroleum Board (CNSOPB) before a survey can proceed. Additionally, seismic survey operators must comply with guidelines established by the C-NLOPB and CNSOPB.

Seismic vessels and their operators are also guided by DFO’s Statement of Canadian Practice with Respect to the Mitigation of Seismic Sound in the Marine Environment, which includes the following measures to be considered in planning and implementing seismic surveys:

According to the International Association of Geophysical Contractors, after more than 50 years of seismic surveying worldwide and over a decade of intense scrutiny by scientists there is no scientific evidence to date that suggests that sound from seismic operations has negative population impacts on marine life.

Current research indicates that there is minimal risk of mortality in marine mammals, fish and invertebrates when the sound energy of seismic surveys is released into the water column, and additional research is ongoing.

Marine mammals, depending on the species and proximity to the seismic survey, can experience temporary changes to their hearing thresholds and in some extreme cases of unmitigated exposure, these effects can be permanent. Similarly, laboratory research has shown some physiological responses in invertebrates – crab, shrimp, scallop etc.

A June 2017 study published in Nature: Ecology and Evolution focused on the impact of seismic surveys on zooplankton. While the results are interesting, there were significant issues with the study’s design including small sample sizes and variability in baseline data which has led to questions related to the validity of the study. The study is currently being replicated in Australia to address the issues with the original study’s design in order to get more scientifically sound data related to the potential impacts of seismic on zooplankton.

CAPP members continue to fund research related to seismic surveys and potential impacts and mitigations to help further the body of knowledge available.