Oil and natural gas activity takes place in four unique stages: exploration, development, production and decommissioning. Below is an overview of how each stage works specifically related to the offshore oil and natural gas industry.

Exploration is the process of locating oil and natural gas resources. Companies may begin their exploration process by reviewing existing geological and geophysical data to learn more about potential reservoirs. Once the data is compiled and analyzed, companies make an economic calculation which factors in things like geological risk, financial returns that might be earned, taxes and royalties etc., to determine whether a geological prospect is worth exploring.

Conducting a marine seismic survey is typically the next step in exploring an offshore area as precise information is needed before investing in drilling an exploratory well given the high cost of drilling in the offshore. A marine seismic survey involves survey vessels using a compressed air gun to send a sound waves through the water at regular intervals along a predefined path. Seismic vessels tow streamers behind them containing hydrophones which record the reflected energy. Hydrophones may also be placed on the seabed in more shallow waters.

The result of a seismic survey is essentially a picture of the various rock layers underneath the seabed. This data is used to identify geological structures that may contain oil and natural gas resources. To learn more about seismic surveys read CAPP’s brochure on marine seismic surveys.

Each well has four major parts:

To begin drilling, a surface hole is drilled a few hundred metres into the sea floor. A continuous steel pipe called a surface casing is lowered into the hole and cemented in place. A blowout preventer (BOP) is installed on the top of the surface casing to prevent water or hydrocarbons from escaping into the environment in the unlikely event of an emergency or equipment failure. Once the BOP is pressure tested, the next section of the well is drilled by lowering the drill bit and string through the BOP into the surface hole for drilling. Extra joints are added to the drill string as the drill bit cuts deeper into the rock. When a section of well is completed, the drill string is pulled out and sections of the casing are joined together, lowered into the well and cemented in place.

All of the drilling activity takes place on a special offshore drilling platform which can be fixed or floating. Drilling an offshore well can take three to four months and can cost $150 million to $200 million per well, depending on water depth and other factors. 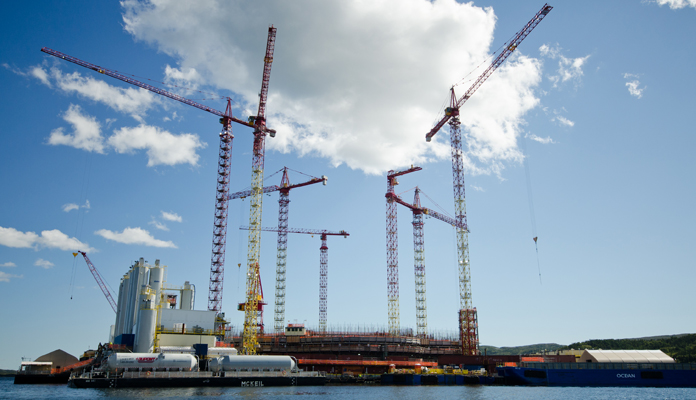 Should a company decide that it wants to proceed to oil and natural gas production, the next step is development. During the development phase, the company develops a series of plans which outline exactly how it will produce the oil and natural gas in a particular reservoir, the environmental protection measures that will be put in place to minimize any environmental impact, the safety measures that will be used on the project, and the benefits of the project to the relevant communities and province as a whole (including employment, revenues, contracts, etc.). During development planning, the company will typically hold a series of consultations with key stakeholders and the general public to explain the project and its benefits. If the plan is approved by the appropriate regulatory body and relevant governments, the company will then proceed with construction of the production facilities and any other infrastructure required, as outlined in the development plan.

The offshore development phase can take five to 10 years, depending on the size of the project.

Producing oil and natural gas offshore is a complex process due to the challenges of operating in a remote and sometimes harsh environment. Production facilities are built to withstand the offshore environment and its challenges, including the potential for sea ice and icebergs in some areas.

These functions may be combined in one structure or carried out using separate facilities or at a separate location.

Although there are different types of offshore production facilities, all are made up of two parts:

An offshore oil and natural gas field can produce for decades, depending on its size. Once all of the accessible oil and natural gas reserves in a field have been produced, the project can be decommissioned, meaning that wells are plugged and abandoned, infrastructure is removed and the site is cleared to remove any debris. Decommissioning also involves test trawling to verify that the area is free of any potential obstructions. These activities are monitored by the regulator.